By Abby Wolfe at The Muse

A few years ago, I had a manager who could be just a tad formidable when she was in a bad mood. I’d spend the entire day walking on eggshells, abruptly turning the other way if I heard her voice, and checking her calendar to see what conference rooms I should avoid.

This probably wasn’t the best way to handle her unpleasant days, though. Not only did it not magically bless her with a sunny disposition, but it also hindered my productivity and made me feel jumpy the entire day. I was letting her mood govern my emotions and actions, and 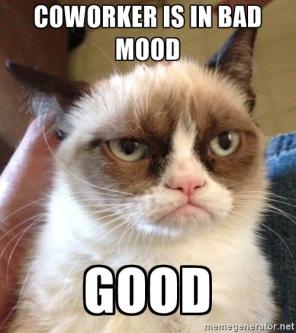 that’s just not fair or effective.

Luckily, in the three years since then, I’ve starting figuring out just what you should (and shouldn’t) do when a co-worker shows up a little—or very—grumpy.

I’m not heartless, I promise. I tear up at most commercials and my partner has banned me from watching This Is Us because I turn into a human water fountain every episode.

When someone shows up acting more sullen or irritable than usual, I think it’s instinct for most of us to immediately ask, “What’s wrong with you?” or “Are you OK?” You’ve noticed something’s off, and as a caring human being and problem-solver, you want to fix it.

But think about when you’re in a crappy mood. You’re so caught up in your head, listing off the number of ways you hate the world, and having someone call that out (especially in front of others) doesn’t really make everything sunshine and roses, does it? Nope, I bet it just adds one more bolt of lightning to your already stormy day.

So, I recommend that you resist that urge. Because if you don’t, you could make him feel singled out and even more testy. If he wants to talk about whatever’s going on, he will.

One of the best pieces of advice I’ve ever received is that when an individual is treating you badly–whether she’s yelling at you, insulting you, excluding you, or so forth—it’s rarely because something is actually wrong with you. Rather, there’s something going on inside of that individual that has nothing to do with you.

Sure, it sucks when Tracy bites your head off when all you did is ask where the stapler is. But if you spend the rest of the day letting those few moments eat at you, you’re wasting your time. You did nothing wrong. And, hey, even if you did, it doesn’t warrant her snapping at you.

Furthermore, don’t engage. Again, the reason for her lashing out at you has to do with her, not you, so you don’t need to get defensive about it. Take a deep breath, let her words and sharp tone roll off of you, and go search for the stapler on your own.

Let’s face it—when someone’s in a bad mood, he isn’t all that fun to work with. Or be around at all. And when you’re in that type of negative headspace, what you really need is the time and space to work through it on your own or just let it take its course.

So, don’t try to force him into conversation. Don’t try to cheer him up. Save any questions and updates you can for the next day. If there’s something pressing, keep it brief and to the point. And if possible, send an email about it instead. It may be easier for him (and less painful for you) to let him process it on his own rather than having to interact with anyone.

Remember: There’s already a thunderstorm happening in his head. Try not to add more noise.