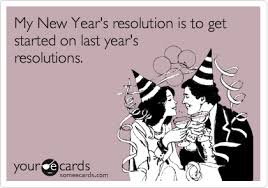 Many people have resolutions on the brain during this time of year. But it’s one thing to set goals — network more, learn to meditate, or get better at writing — and quite another to actually accomplish them. What are the right kinds of resolutions to make? How do you stay motivated? How do you turn your intentions into reality?

What the Experts Say

A lot of people set personal and professional goals this time of year but very few succeed. That’s because we often “set goals that go against our nature,” according to Tomas Chamorro-Premuzic, professor of Business Psychology at University College London (UCL) and the author of Confidence. “We all have predispositions, character traits, and habits that we have built over many years,” he says. “Most of our New Year’s resolutions and goals involve breaking these patterns, which is very difficult to do and requires a lot of work.” So you have to be deliberate and strategic about setting goals and staying on track. “It’s important to have focus,” says Joseph Weintraub, the founder and faculty director of the Babson Coaching for Leadership and Teamwork Program. “You need to set the right goals within the right timeframe.” Here are some pointers on how to make your resolutions stick.

This is the time to “think small”— both in terms of the number of objectives and the timeframe in which you plan to accomplish them, according to Weintraub. He recommends setting no more than three goals — more than that is “too overwhelming” — with a deadline of a year or less. “For most companies and individuals, it’s hard to think five years ahead,” he says. Be ambitious — but not overly so, adds Chamorro-Premuzic. Choose things that challenge and stretch you but aren’t impossible.  Also, make sure you’re setting “a goal that matters and is relevant” to you. “It’s so much work to create change, you have to really want it,” he says.

Focus on the positive

While at least one of your goals ought to involve developing an area of weakness, Weintraub cautions against getting hung up on self-improvement. “Too often we focus on what we need to do better,” he says. Instead: “Consider things you’re good at and set goals that leverage those strengths.” Say, for instance, you’re a strong writer or an effective public speaker; you should create goals that involve helping colleagues sharpen their presentations skills or using your writing abilities to earn a promotion. Your ultimate aim is to “move your organization forward and propel your career,” he says.

Once you’ve decided on your goals, write them down and share them with others, including your manager, peers, direct reports, and friends and family. “When you make your goals public, you’re committing to them,” says Chamorro-Premuzic. Openness also enables others “to hold you accountable.” Weintraub explains that candor is especially important when your goal has an immediate impact on the people you work with. If, for instance, your goal is to reduce your micro-managerial tendencies, explain to your team that you will be delegating more often. “Tell people: ‘This is what I’m working on and here’s how I am trying to do it,’” he says. “Be explicit and overt about your intentions.”

Create a plan of action

To accomplish any goal — personal or professional — you need a step-by-step strategy. After all, says Weintraub, you wouldn’t expect to succeed at losing weight without systematically changing your eating and exercise habits. So “you need to think about tactics. Ask yourself: What actions do I need to demonstrate to accomplish this?” If your goal is nebulous — say, for example, to develop a more trusting relationship with your direct reports — you’ll need to think about  specific behaviors that will help you, such as taking each of them to lunch individually and engaging with them on a more personal level. “And if you’re not seeing results,” says Chamorro-Premuzic, “you should also have a Plan B.”

An encouraging and supportive network is critical to reaching your goals, says Chamorro-Premuzic. Your support system could include colleagues, mentors, your significant other, a professional coach, or even peers outside your organization. They can be both your cheering squad and sounding board. “They will motivate you and encourage you, and when your morale is low, they will boost it.” Your support system will also help “reinforce that your goals are important to you and your career,” adds Weintraub. “The more you engage others in the process, the more likely you are to accomplish the goals you set for yourself.”

When you launch into working toward  a new goal, you feel inspired and energized. But as the weeks and months trudge on, that initial excitement wanes, and it can be a struggle to find the time or motivation for it. To ease this problem, work toward short-term targets that bring you closer to your end goal. The success you achieve along the way should help you feel good about “the incremental progress” you’re making, says Chamorro-Premuzic. “You want to see change in a positive direction and small improvements,” he says. “The point is not to get better than others, it’s to get better than the old version of yourself.” To stay on track, “you need regular signals” that reinforce what you’re working toward, says Weintraub. It could be a reminder on your smartphone or a recurring “meeting” on your calendar where you “take the time out of your day to think about what your goals mean to you and your career.” At a practical level,” says Weintraub, you need “simple things to keep you going.”

Nothing elevates cortisol levels like an approaching deadline. In some ways, the stress works in your favor, according to Wientraub. “It helps you focus on the goal,” he says. “It’s like when you know your doctor is going to put you on the scale at your next checkup, or when you know your boss is going to ask you about the status of a project at your next team meeting.” But while stress can drive performance, it’s important that you “don’t lose perspective” when unforeseen circumstances arise. “Don’t be too harsh on yourself,” says Chamorro-Premuzic. “You don’t want an unhealthy level of obsession about reaching your goals.” If a colleague needs you on a project or your personal life becomes unexpectedly complicated and completing your goal within the given timeframe becomes too difficult, cut yourself some slack. And don’t forget Weintraub’s golden rule of goal setting: “Strive for excellence, but sometimes good enough is good enough.”