A revitalized airport is seeing increased flights and thriving business activity that spurs the local economy. But some local residents are feeling that all that activity is coming at the expense of their tranquility. 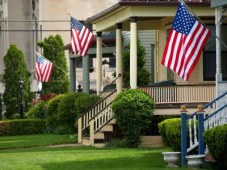 A flag flap had some Hutto homeowners on the defensive, facing off with their homeowners’ association on when they can fly the U.S. flag

Fearing a homeowners association’s influence in city government, Dunwoody Mayor Denis Shortal asked its members who serve on government boards to choose: resign from the association or the boards.