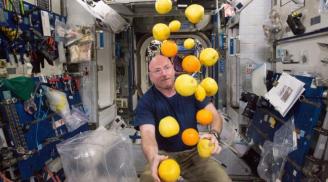 American astronaut Scott Kelly recently touched down in Kazakhstan after spending a year at the International Space Station. How did a year cooped up with one other guy in a cramped quarters affect Kelly?

Based on the fact that his first words upon being pulled from his landing capsule was a joke about the weather, clearly not too badly. That’s great news for Kelly, NASA, and the future of manned space flight, but it’s also interesting for the rest of us stuck here on earth amid the usual small hassles and daily annoyances of a planet-bound existence. If Kelly can laugh through adversity, surely we can too, and borrowing some of his tricks for maintaining his sanity can surely help.

Kelly’s year in space revealed that he’s a science ninja, a seasoned hand with social media, and a not-half-bad photographer, but it also showed that he’s a pretty good comedian. From chasing his fellow ISS resident around in a gorilla suit to bantering with the President of the United States, one key to Kelly’s resilience was obviously his sense of humor.

So if a guy living inside a giant, high-tech tin can floating in the most hostile environment imaginable for a year can find the funny in his everyday life, certainly most of us can do the same despite our mundane professional challenges and personal annoyances.

2. Gratitude is a mental health workout.

Sure, living in a confined space for a year, missing your family, and dealing with giant urine-acid balls has to be challenging, but on the other hand Kelly was in space! He clearly never forgot to appreciate the extraordinary experience he was having, as well as the large team that made it possible.

Science suggests it’s a strategy that can work for everyone. Counting your blessings, studies show, strengthens your brain’s ability to see the bright side going forward, making it easier to be even more grateful and happier in the future — no matter the challenges you face.

3. Keep your perspective with awe.

How does living in space affect astronauts psychologically? It has its difficulties, sure, but previous manned missions suggest one of the biggest effects is positive.

“Something that can happen to the human mind when it breaches near space. Believers call it the ‘overview effect,'” Fast Company has reported.. In essence, the awe-filled feeling you get when you see our planet glowing below expands your sense of humanity, giving you a stronger sense of connection to your fellow earthlings. Research suggests that awe has a powerful impact on us, boosting kindness and well-being.

Every one of us can try to find opportunities to wonder at the majesty of nature or art in our everyday lives, expanding our horizons and helping us see past our petty individual challenges and constraints.

4. Everyone needs someone to talk to.

Astronaut is one of the toughest jobs to land out there. NASA tests would-be space men and women rigorously not just for physical health but mental toughness as well. And knowing that one’s career hangs in the balance doesn’t exactly encourage an astronaut to speak up about any mental health challenges they might be facing. But even the toughest of the tough need someone to talk to, a fact NASA acknowledges. “Over the past several years, NASA has been funding a group of psychologists to develop a software program astronauts could use, while aboard spacecraft, to help them work through depression and conflicts with their fellow space-goers. Because astronauts are often reluctant to admit to anxiety or depression, out of fear they won’t be allowed to go to space again, the software is designed so nobody can track whether an astronaut uses it,” reports the Pacific Standard.

If badass test pilots and astronauts need an outlet, so do you. No one should white knuckle their way through adversity alone.

What was your favorite moment of Astronaut Kelly’s #YearInSpace?

Jessica Stillman is a freelance writer based in Cyprus with interests in unconventional career paths, generational differences, and the future of work. She has blogged for CBS MoneyWatch, GigaOM, and Brazen Careerist.