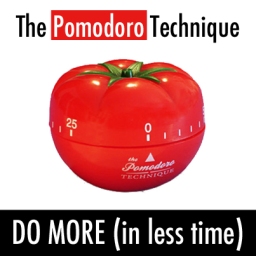 A formerly frazzled founder claims he managed to squeeze 40-plus hours of work into just 16.7. Could his system work for you?

What if I told you there’s a way to get exactly the same amount of work you’re now accomplishing done in less than half the time? You’d probably respond that you have some amazing magic beans you’d like to sell me or ask for directions to the unicorn stable.

The idea that some miraculous wrinkle in the time-space continuum exists that can instantly compress your workweek into a more humane duration seems too fabulous to be believed, but entrepreneur Chris Winfield insists that the idea is fact, not fantasy. In a recent post on his site, he relates how he’s developed a system for cramming 40 hours of work into just under 20 hours (a startlingly precise 16.7 hours, to be exact) using nothing fancier than a kitchen timer and his phone’s airplane mode.

He laid out the whole system in detail in a recent post that also explains the genesis of his new approach. If you’re seriously considering giving the system a try, it’s well worth a read in full to get all the finer points, but here’s a basic rundown.

There’s nothing radical to Winfield’s first suggestion–the Pomodoro technique, which is simply a fancy term for setting a timer to work in 25-minute sprints of single-minded focus (no Facebook, no popping over to your inbox quickly, etc.) followed by 5 minutes of rest. It has been around (and much recommended) for ages. After every four intervals, called Pomodoros, you’re supposed to take a longer 15-minute break.

It sounds incredibly basic, but Winfield insists that after much monkeying around to find the perfect number of Pomodoros to shoot for in a week, the simple technique radically increased his productivity and his sanity.

“My goal was eight Pomodoros each weekday, for a total of 40 per week. This worked, sort of, but as they say, life happens. Some days I had so many meetings to attend, or my daughter had a recital at school that I didn’t want to miss, and I just couldn’t find fit in eight Pomodoros. It became clear that 40 was my magic weekly number, but I needed to be less rigid with how I approached my workweek,” he says (which also explains the oddly exact time he allots for work in this system: “40 Pomodoros = 1,000 minutes of work (plus 350 minutes of breaks) each week. This averages out to about 16.7 hours of work each week.”)

The second half of Winfield’s approach, as the quote above suggests, is all about flexibility. To manage to get to his goal of 40 Pomodoros, he found he had to choose his tasks wisely each day, taking into account his mood, physical energy levels, and degree of mental focus.

“The reality is that I’m a human being, living in a world full of other humans. I have emotions I don’t control, and I often get tired. Some tasks I simply don’t feel like doing, even though I know they’re important, and possibly urgent. To make this work long-term, I had to face these things and learn to accept them, working with rather than against them,” he writes. In order to stop fighting his moods, he learned to survey his mental state and find jobs to do that would reverse whatever was ailing him–on low energy days, he’d find tasks that made him feel healthier; if he was sad, he looked for work that would cheer him up.

Truly forget the nine to five.

The last step for Winfield was jettisoning old ideas of when he should work and when he should unwind, so he could better utilize all the hours of the day, not just the ones falling within “normal” work hours.

“The final piece to my puzzle was moving from a five-day work-week, where I had to stop by 5 p.m., to a seven-day work-week, where I could work when it suited me. This took me from 40 to 45 hours available to get my 40 Pomodoros in, to having 168 hours each week. Since I only need 16.7 hours net, that means I only work 10% of my time. What a difference.” he says.

A note for the skeptics

Taken together, these three simple changes meant that Winfield went from working a frazzled 40-plus hour week to getting just as much done in half the time, he claims. Though there is a pretty hefty caveat: He doesn’t count meetings and calls within those 16.7 hours of work.

His bottom line: “I ‘work’ 35 to 40 hours a week, but I spend at least 20 to 25 of those hours on calls, meetings, networking online and offline, and other less-focused tasks. These are important, but I don’t count them as work time. I truly work 16.7 hours each week, and I get about five times more done in those few hours than in the other 25 hours.”

So that incredible 16.7 hour number does take a little word-choice wizardry to make a reality, but whether the final tally of hours worked is a little tarted up or not, Winfield insists he’s a far saner man for his system–having whittled an overwhelming 60-hour workweek down to a healthier and more manageable schedule.